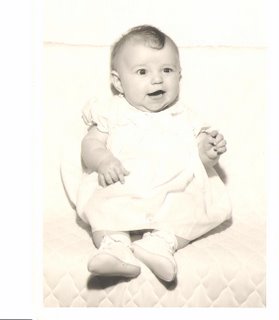 The LHN website has been updated with information about some new designs coming out soon. The first one, is going to be a "must have" for me - it's called "Season of Rest" and Trail Creek Farm has a pillow that compliments the design beautifully.

The other thing that caught my eye is a series coming out in February entitled "Dear Diary". No pictures posted yet, but the description sure has sparked my curiosity!

I'm anxious to return to my "regular" stitching after the holidays - right now, I'm still working on ornaments and small gifts! Take care and happy stitching!
Posted by Cathy B at 11:48 AM 4 comments:

I had time today to "pick up" my stitching room, so here are the pictures. Trust me, it's never this neat and tidy! This used to be my son's bedroom (it's quite small in size). When we finished our lower level, he moved down to a larger room.

As you can see, I've got a comfortable wicker chair to sit in. Note the tablecloth on the table - this was stitched by a woman in Hungary. To the right is a china cabinet filled with Beatrix Potter figurines. When my kids were small, we were crazy about the Beatrix Potter stories. At that time, you could pick up these figurines quite inexpensively. We enjoyed looking at these figurines when we would read the stories! 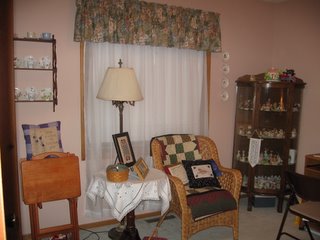 To the right of the cabinet is our computer. In the corner is a chest of drawers which houses threads, fabric/linen, kitted patterns, stash, etc. The table is a great work surface; my sewing machine is always handy! On the table, there are cookie tins filled with balls of DMC #8 and #12. I've started hanging framed projects in this room where I can enjoy them! 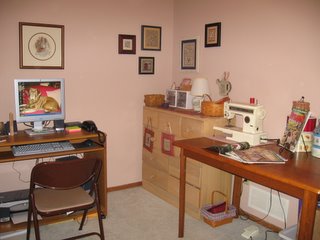 The only thing not visible to you in these pictures is my stash of patterns - I have two "two-inch" three ring binders filled with patterns. They are all in plastic sleeves and organized by designer.

I hope you enjoyed this tour of my stitching room. Now you know where I am when I'm thinking about you!
Posted by Cathy B at 6:09 PM 9 comments: 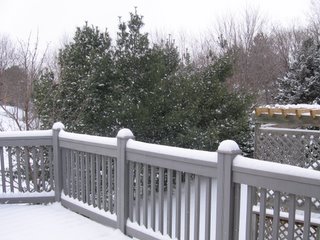 We received our first significant snowfall today, about three inches. More snow is in the forecast for Monday and Tuesday. These are great days to curl up on the couch with a hot chocolate and some good stitching!
Posted by Cathy B at 12:08 AM 3 comments:

Last night I attended the monthly meeting for my local chapter of EGA. It was my night to bring treats and my mom agreed to bake for me (she's a terrific baker!) We had lemon bars, pumpkin bars and date bars. They were all delicious!

I'm happy to report that our chapter made a whole shoebox full of bookmarks! I'll know the exact number next month, but there were lots of them! Many different techniques were used to create these bookmarks including, cross stitch, blackwork, hardanger, pattern darning, etc. It feels so good knowing that these bookmarks are going to make someone feel really good!

I've been stitching ornaments, but have no new pictures to post. Many of them you have seen before. Once I have them finished (completely finished!) I'll post a picture.

It's Thanksgiving week here in the U.S. We will celebrate the traditional way with turkey, stuffing, wild rice, sweet potatoes, cranberries and pumpkin pie. Since both Thursday and Friday are holidays for me, it makes for a nice long weekend! Unfortunately, most of it will be spent cleaning and decorating for Christmas, but that's okay.

Best wishes to everyone this week and "thanks" for visiting my blog!
Posted by Cathy B at 7:12 AM 6 comments:

I finished off the last of my bookmarks tonight. My regular readers may recall that I was stitching these (along with help from my daughter) for my local EGA chapter. They are going to be donated to an adult literacy group.

Last month, I turned in three bookmarks, two had been stitched by my daughter who is 13 years old; I had stitched the other one. I wanted to stitch a few more this month and will need to turn them in at our next meeting on Monday, Nov. 21.

Our chapter provided materials, but I was unhappy with the banding - it is a tad bit too wide for a bookmark and it has hearts bordering either side which limits color and design choices. So after stitching one on this banding, I went out and bought some banding inexpensively at my local Michaels.

All of these designs are using the technique of pattern darning which is quick and easy. I will have five additional bookmarks to turn in this Monday! 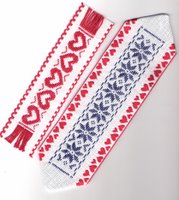 Well, here it is, Sunday night and I don't have too much to show for myself. Limited stitching time again this weekend.

My daughter plays traveling basketball and this was the team's first weekend tournament. Her team took 4th place, not bad considering that the first game was a blow out (45-5). They then lost the next two games, one in overtime. They played well, so they should be proud!

I did work on bookmarks this week for my chapter's EGA service project. I'm not real pleased witht them so I'm not going to post any pictures. The chapter supplies the banding and the thread. The banding is too wide and it has red hearts going down either side - really limits the possibilities. I purchased some inexpensive banding at Michael's this weekend and am going to try to stitch up some nicer bookmarks before next Monday. I'll turn back the other banding.

On Friday night I stitched for about three hours while I watched (listened) to the U of M hockey game (vs Anchorage). I stitched the following Hardanger candy cane (pattern from Satin Stitches): 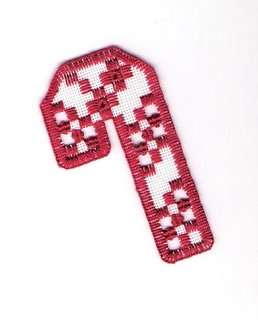 Then on Saturday night, while watching the same two teams again, I started the following Austrian looking ornament design: 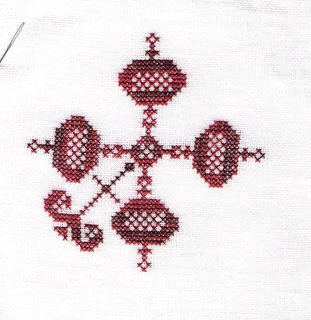 Not too long ago, on Romy's blog I saw some beautiful Austrian designs. These designs intrigued me because my maternal grandparents immigrated from Austria/Hungary to the United States in 1906. I happened to be at one of my LNS a few weeks ago and found the following pattern from Thistle Threads: 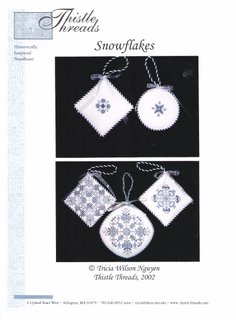 These designs are perfect and very similar to the ones I saw on Romy's blog. The other rather significant achievement is that I am using silk for the very first time! I'm stitching this with an overdyed called "In the Burgundy" by The Thread Gatherer. It's about 2/3 complete, so stay tuned for updates.

I guess that's it for tonight. Looking forward to the week ahead...
Posted by Cathy B at 10:17 PM 7 comments:

Good Morning! I'm sad to report - that I don't have any new stitching updates. There were a million other things to do this past weekend.

I did have some fun on Saturday though - my sister-in-law and I went to a wool expo and then to a holiday boutique. I purchased a wool pincushion kit at the wool expo (a sunflower). I had to laugh - the ladies who stitch, weave, and knit with wool are just as crazy about their craft as the rest of us! It was fun to see the beautiful colors and the projects.

The holiday boutique was okay. We have a lot of these at this time of year; between now and Christmas you can find a handful to go to on any given weekend. Again, I didn't buy too much - when you go to these year after year sometimes everything starts looking the same. I think I may need to take a "year off"! Then next time I go there will be all kinds of new ideas and handmade crafts for purchase.

I'm going to set one stitching goal for myself this week: more bookmarks! I had committed to stitching a few more bookmarks for EGA and I need to get them done. They need to be turned in at this month's meeting on Nov 21. The darning pattern bookmarks had really turned out nice and were quick and easy to finish, so more than likely I will do more of those.

I want to share with you one other activity I participated in this weekend. We dedicated a "peace pole" at our church this weekend. The ceremony was quite moving - many school age children were there and midway through the ceremony about twelve of us said the phrase "May Peace Prevail in Earth" in other languages: Hebrew, Tagalong, Spanish, Korean, Lithuanian, Sioux Indian, American Sign Language, etc. I contributed by saying the phrase in German. Our peace pole has the phrase engraved on it in several languages too. The moment was an opportunity to stop and think about this wonderful world we live in and reflect on what we can do to help promote peace.

I just want you to know that I appreciate the worldwide friendships I have made through my stitching blog. Take care and have a great stitching week.
Posted by Cathy B at 7:40 AM 5 comments: