Check out this Scissors Fob!

On Wednesday, I received a wonderful package in the mail from Chris. In the package was this scissors fob along with some other goodies! The scissors fob is truly amazing - the design is stitched over one! Isn't it beautiful? She also sent a chart from Lavendar Wings "Midsummer Quilt Dream", some cream colored fabric, and three skeins of GAST. Thanks Chris. 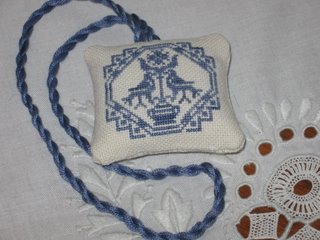 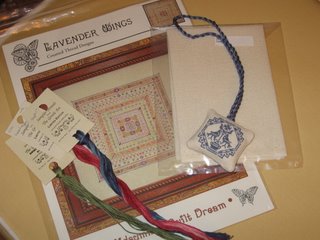 My fob and other goodies are going in the mail tomorrow to .... oops can't tell. I'll update you next week after the package is received!
Posted by Cathy B at 5:02 PM 18 comments:

I'm always relieved when I know my package has arrived - particularly when it is going outside of the U.S. This time, I stitched a gift for Ana in France! I wanted to try a different finish and it just kind of evolved as I stitched. This little scissors case is done on banding and is lined with coordinating red fabric. As you probably guessed, I used elements of a LHN design to complete the front and back. 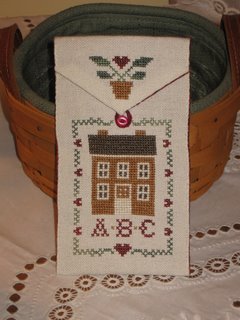 Back (sorry, picture is a little bit dark): 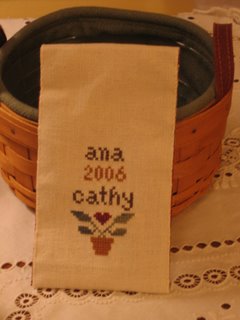 Here are a couple of additional pinkeeps I finished recently too! First, LHN and CC Watermelon: 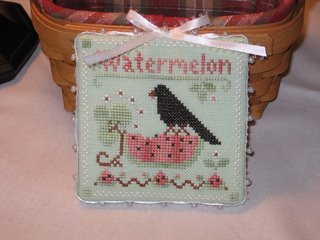 This is one of the recent Essy's Friends kits (design from MDesigns). I stitched it over two on 36 count fabric and turned it into a pinkeep: 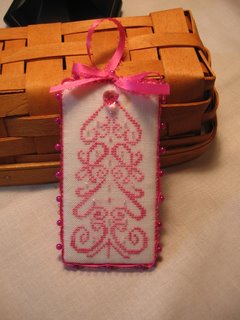 I had two unexpected packages in the mail today. One is from Chris - a scissors fob - from an exchange on the US Exchange Board (I may have to wait until tomorrow to get a decent picture in good light.) The fob is amazing - stitched over one. Wait until you see it!

The other box was from Sudberry House. The Shaker clock that goes with LHN's Quilt Time Sampler was on clearance!

I received a package in the mail today from Andrea in England. She had my name for the SBEBB House Themed Exchange. All I can say is WOW! 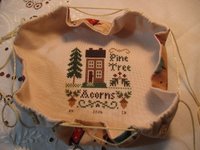 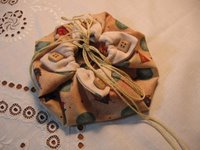 Andrea stitched a bourse (drawstring bag) for me. The outside fabric is covered with cute houses, there are four wooden buttons in the corners and the inside design is Acorns and Pines from LHN. Isn't this little bag adorable? Now I have to try to make one of these!

In addition to the bourse, Andrea enclosed a sweet little plaque that reads "Having somewhere to go is Home. Having someone to Love is Family. Having both is a Blessing." She also sent a notepad and the Shepherds Bush pattern - Bluebells. Thank you so much Andrea! 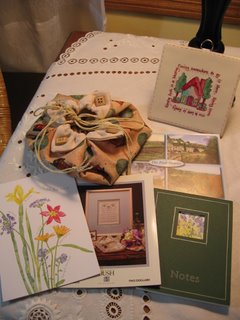 I hope to post the exchange gift that I stitched soon - I think it has been received, just want to be certain before I post a picture.

Have a nice evening and thanks for stopping by!
Posted by Cathy B at 10:09 PM 20 comments:

My Week is Off to a Great Start 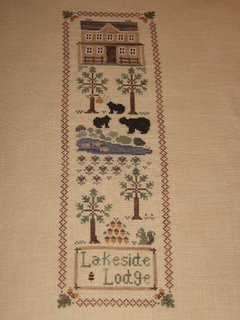 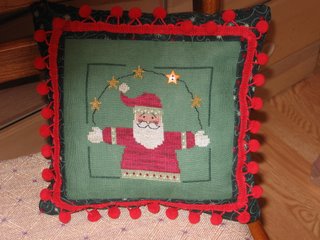 Thanks for all of your comments regarding the pinkeeps!
Posted by Cathy B at 9:07 PM 19 comments:

Lots of progress made this weekend on finishing a few of my stitched pieces. The two pinkeeps are for me; the ornaments will be Christmas gifts. 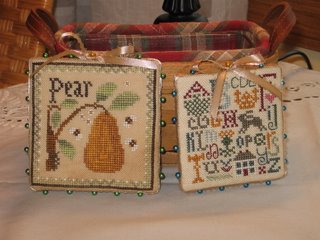 Both of these ornaments are Glory Bee Designs from recent JCS Ornament issues. 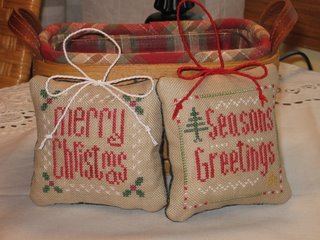 Thank you all for your recent comments. Marie S. and Adele, if you can share any additional information about the Hungarian embroidery, please e-mail me. I changed my profile to include my e-mail; you'll find it there.

Have a great Sunday everyone!
Posted by Cathy B at 9:46 AM 21 comments: 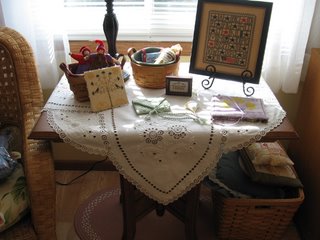 After I posted the last time, Marie S. left a comment asking about the tablecloth underneath my stitched piece. Well, here's the answer.

The tablecloth was a gift to me from my mother's relatives when I visited them in 1997 in Austria. My maternal grandparents immigrated to the United States in 1906 from what was then Hungary. The area, called Burgenland, became part of Austria after WWI. My mother and I still maintain close ties with our cousins who live on the southern border of Austria (about one hour south of Vienna).

When my mother visited a year later, she asked her relatives to take her to the area that her grandfather's family originally came from in Hungary. Two tiny villages, Himod and Hoevej, are about a 30 minute drive south of the border. It's in this area that two sisters make these beautifully embroidered tablecloths and doilies. My mother met them and purchased nearly everything that they had for sale.

This embroidery is nothing like anything else I've ever seen - there are elements of hardanger, satin stitches, cutwork and the medallions are either needlelace or knit into the cut out holes. It's also unusual for Hungarian needlework which is usually stitched with very bright colors.

Enjoy the pictures. If anyone knows anything more about this needlework, I'd love to hear from you! 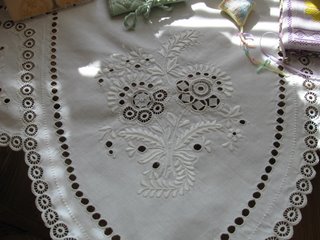 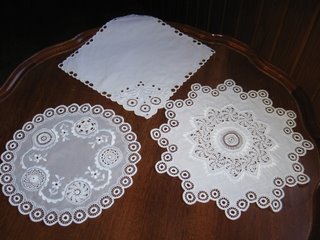 Today I received a wonderful package from Laurie in Decorah, IA - she stitched a lovely pinkeep for me using elements from a Carriage House Samplings design. I was tickled to also receive the pattern for And A Forest Grew, some fabric fat quarters, and a package of needlework labels from CHS! Thanks Laurie! 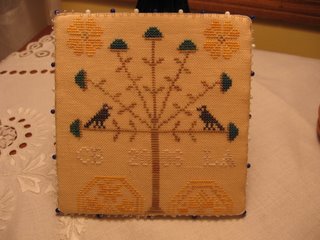 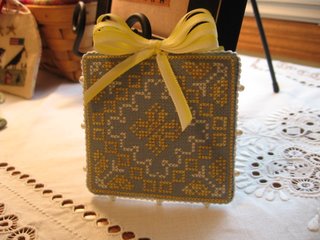 This week I've been working on Lakeside Lodge - it's about two thirds finished. I'll try to post a progress picture tomorrow. Take care.