On the Sixth and Seventh Day... 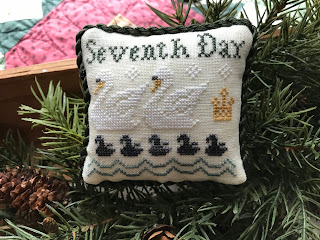 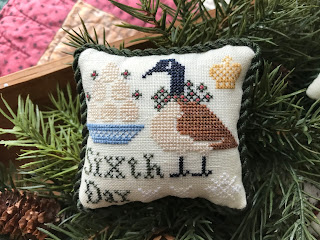 Friday and Saturday were stitchy days for me.  Despite the frigid temperatures, I went to Friday night Stitch-In at Stitchville.  Had a great time stitching with friends.  The roads were a bit treacherous on the way home, but I stayed to the right and drove slowly and carefully.  Yesterday, another group of stitching friends gathered at our local grocery store that has a community room.  I arrived at 10:00am and stayed until 4:00pm!  Stitched my day away!

Today I’ve been doing some crafting.  A friend told me about these punches you can buy at Michael’s that are shaped like a gift tag.  I used my coupon so it was only about $7.00!  I used the punch to recycle my Christmas cards.  Now I have gift tags for next year’s gifts! 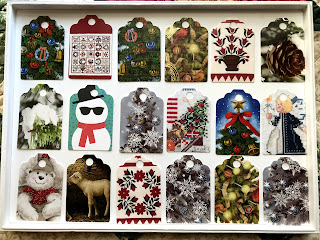 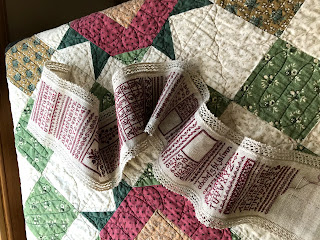 On the Fourth and Fifth Day...

...my true love gave to me.  Five Golden Rings and Four Calling Birds! 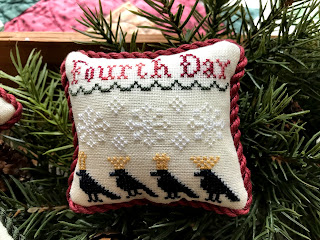 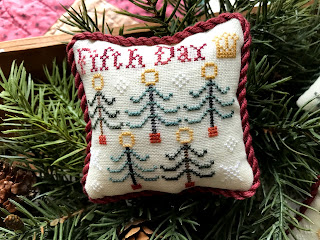 On the fourth and fifth day, this stitcher rested.  It’s bitterly cold up here in the north and after I arrived home from work both days I just wanted to curl up under a warm blanket.  I have stitchy plans this weekend though and will have more to share, so stay tuned.

The 12 Days of Christmas little pillows that I have been sharing with you were a Christmas gift from my friend Chris.  The design was complimentary and you will find it on Paulette Stewart’s blog.  Chris did her own take on colors; she was inspired by blogger “The Copper Fox”.  It as a special gift and I love the little pillows!
Posted by Cathy B at 2:19 PM 2 comments:

On the Third Day of Christmas... 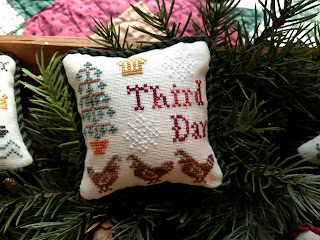 No stitching tonight.  I was working on another project.  How about if I share with you a picture of our Christmas tree?  Hopefully there will be time for stitching tomorrow night. 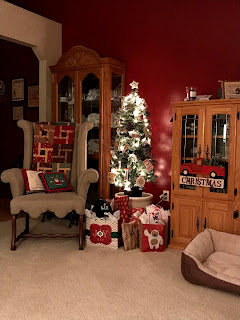 On the Second Day of Christmas... 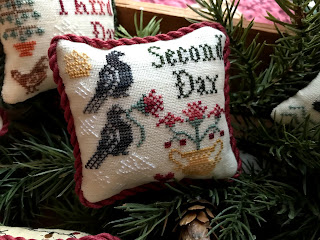 Tonight I had to whip up a couple more hardanger ornaments for some late Christmas gifting! 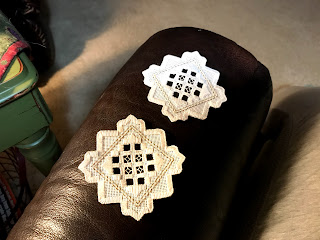 It’s bitter cold here in Minnesota.  Looks like it is cold and snowy in many parts of the U.S.  If you are impacted by cold winter weather, stay warm and safe!
Posted by Cathy B at 8:45 PM 8 comments:

On the First Day of Christmas...

...my true love gave to me, a Partridge in a Pear Tree! 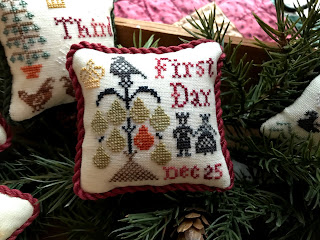 We had a great day yesterday, enjoyed a wonderful meal, watched football, played some cards, opened gifts and told some stories.  The Mad Tatter was here along with my youngest brother and his family. Just how Christmas Day should be!

Merry Christmas!
Posted by Cathy B at 8:05 AM 5 comments:

I popped out early this morning to run a couple of last minute errands.  On my way home, not far from our house, I saw the most amazing thing.  At first I didn’t believe what I was seeing, so I turned around and went back for a second look.  In one of the trees in a somewhat-wooded area between a nearby hospital and some apartment buildings was this beautiful bald eagle.  He was so unbelievably large.  He just sat there, quietly, majestically, peacefully while the other birds chirped and flitted around in the trees.  I see bald eagles quite often as I cross over the Minnesota River on my way to work, but I’ve never seen one this close to home.  It was amazing. 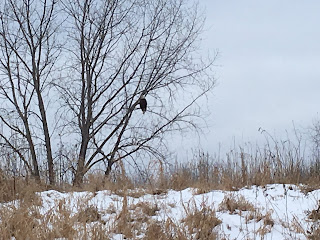 I decorate our home quite simply at Christmastime; I just don’t have a lot of extra time to do much more.  I bought this “Charlie Brown” Christmas tree at Michael’s this year and I think it is perfect for displaying some of the smaller tatted ornaments I have collected over the years.  Some were made by the Mad Tatter, some were made by others. 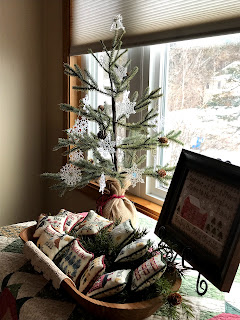 I just think it’s the perfect tree for these beautiful white lacey ornaments! 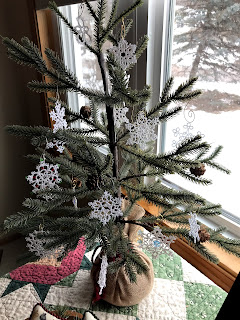 Back in the Saddle Again

I must admit, last month I almost gave up on this old blog.  Initially, I thought it was something I had done that was preventing me from posting.  After returning from Amsterdam I had to make a day trip down to Atlanta and on that late night flight home I was tired.  I did something I’ve never done before - I left my iPad on the plane in the seat pocket.  Anticipating that I would never get it back, I changed passwords on everything - iTunes, Facebook, Instagram, Etsy, etc.  I thought this was somehow related to my issues with Blogpress.  After several frustrating attempts to resolve and with help from a couple of other bloggers who also used Blogpress, I realized that theyjust ceased to exist!

So then I had to find another posting service.  I think I used Blogger a long time ago when I first started this blog.  Something happened and I transitioned to Blogsy and then Blogpress.  So now I am back with Blogger.  I had some issues posting photos, but I finally had time to figure that out.  So here we go again - fingers crossed!  By the way, I did eventually get my iPad back.

So what have I been stitching?  Most of November and December were spent stitching ornaments.   I probably stitched close to two dozen of the Hardanger ornament in the photo below.  I made eight sleds.  All have been gifted already.  The little Raggedy Ann ornament was made for my niece, June. 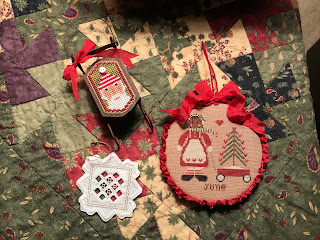 Last night I wanted to work on something different and pulled out a Blackbird piece that I started Thanksgiving weekend.  It’s called Feliz Navidad.  I’m stitching it on 40 count Legacy, but last night I was struggling with the linen.  My eyes have been changing; I have never needed magnification, but I think that a good quality magnifier is in my future!

Anyway, I thought that stitching on 36 count linen might work better and I knew exactly what I wanted to do.  I pulled out this Prairie Schooler chart which I have wanted to stitch for years. I had a piece of 35 count Antique Lambswool in my stash that fit the bill.  Hee is my stitching progress from last night and tonight. 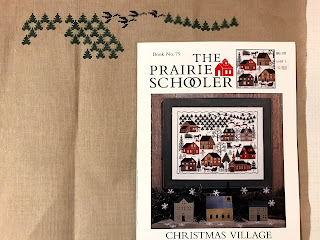 It’s been quite cold hee in Minnesota and my hands have been extremely dry.  This is what I use to keep my hands in shape for stitching.  These Burt’s Bees products work wonders overnight.  I also included my new favorite EOS lip balm.  It’s called Holiday Peppermint. 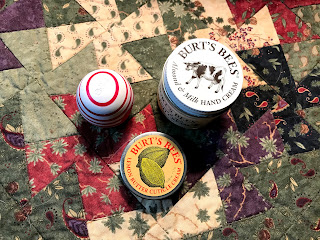 That’s all I’ve got for tonight.  Tomorrow we will have a rather low key Christmas Eve celebration.  We will be preparing for Christmas dinner on Monday.

Thanks for stopping!  Merry Christmas!

I will return soon.  I think I have this figured out! 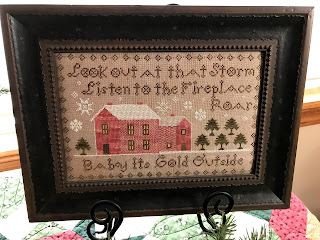 My Blog is Sick

I’m not sure how many stitchers out there frequent this blog anymore.  If you are a regular reader, you’ve noticed that there haven’t been many posts lately to this here blog. Life has been busy for sure, but I’ve run into a snag with Blogpress.  It’s not cooperating with me.  When trying to publish a post, it returns an error message stating that my “Blogger authentication is expired”.  Has anyone out there in blogland ever encounteed this message besides me?

I’d like to keep this here blog going, but until I can figure this out, this blog is in an unconscious state in the ICU on the verge of death.

Fellow bloggers, if you have any tips for me would you please leave a comment or shoot me an email?  Thank you!