I needed to take a little break from laundry, vacuuming, and other housework. Wanted to share a pic with you of what I've been wokring on in-between exchanges and other stitching commitments. (Sorry, I should have taken time to press it!) Not too much more to go, two letters, some needles and the border. 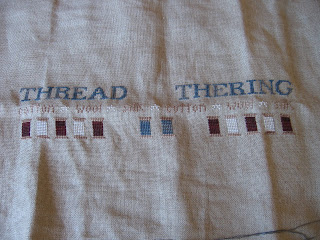 Here's a snap of Carol's Neighborhood RR - I'm going to be stitching the empty square at the top. Carol had an extra square left so Mama Joan filled it in. She stitched one of the houses from LHN Two White Houses - it's to the right of the middle square. Doesn't Carol's neighborhood RR look great? (Once again, I'll apologize for not taking time to press it!) 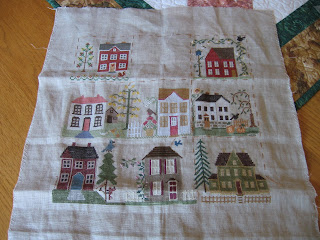 Laundry? Dusting? Are you being held prisoner - I'll call out the cavalry if you need rescuing!!

Lovely RR so far, and only your square to go -- And the thread gatherers looks wonderful!

Housework is no fun but isn't it a nice feeling when it's done? Enjoy the rest of your weekend.

My goodness, how lovely is Carol's RR. It is hard to believe that this RR is coming to an end. Love your new WIP.

I love your Thread Gatherers! And that RR is really something special!

Congrats on all the accomplishments--- even those house-cleaning related.

I love that LHN piece you're doing! And the final square of Carol's RR... how exciting!

oh my gosh you mentioned the swear word (housework) lol.. ilove the rr it looks great and welldone on your stitching

Aw, my RR looks so sweet!!! and... your Thread Gathering is off to a fabulous start too!