Neither Rain, Nor Sleet, Nor Snow ...

...nor dark of night....would keep me away from a needlework class with Lori Markovic! Yes, my friend Joan and I traveled to Madison, WI yesterday to take a class from Lori at Stitcher's Crossing. I've always wanted to meet her in person; I absolutely love her designs, and so I snatched up this opportunity a few months ago as soon as I knew she was coming.
Now, realize of course that you never know what the weather is going to be like during the winter months in MN or WI. Traveling from the Twin Cities to Madison is a fairly easy drive, it's interstate the entire way, but as luck would have it, a winter storm hit the Twin Cities on Friday night. It was fairly clear here on Saturday morning and die-hard Minnesotans that we are, we decided that nothing was going to hold us back! Our four hour drive took five and a half hours; in places the driving was good, in other places not so good, but the important thing is that we made it safe and sound and with only seconds to spare!

We walked in the shop at precisely 1pm. The lady behind the counter said "Are you the girls from Minnesota?" We said, "Yes" and everyone in the class room cheered! We made it, woo hoo! What a fun group of ladies we met. A stitcher that I had met in the fall of 2007, Diana, was there. Leslie from the Legacy board was also there (I had met her at a Merry Cox class in the Twin Cities last year) - it was good to see both of them again!

Our class project was this little needle book called Pins & Needles. We had all done our stitching in advance of the class, so the next two hours would be spent assembling with Lori's guidance. The stitched piece was wrapped around two pieces of cardboard; then a piece of fabric was ironed to the inside to cover up the raw edges. There are grommets in the binding which hold the wool felt with the cording. As you can see, we also stiched up a strawberry pincushion. The two hours went by far too quickly! 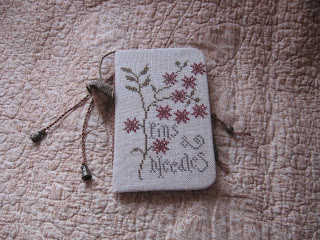 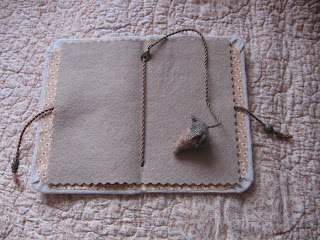 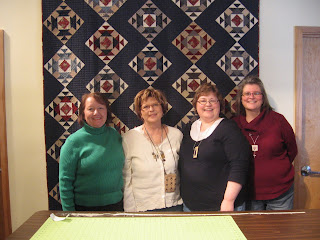 P.S. Lori is wearing the "Star Pouch" that she designed and was available at Nashville this year. I am wearing my Miss Mary Mack necklace (stitched by friend Chris for me!)

If you are ever in the Madison area, Stitcher's Crossing is a great shop! They cater to both quilters and needlework lovers! Joan and I did a bit of stash shopping before heading home. By the way, our trip home was fine - it was still snowing around Madison, but once we hit the interstate and headed west, the roads were fine and it was clear sailing.

I love your class project!

Oh my goodness! What a lucky duck you are! First Utah, now this! Good for you for driving all that way too! Thanks so much for sharing your experiences and stash and class pieces with us.

What a fantastic project!!! It sounds like you had way too much fun! Glad you made it safely!

What a cute project! It sounds like the class was worth the drive. That is really cute that the class cheered when they heard you two had made it. :)

Sounds like you had a lot of fun. The class project turned out great!

It was a great time. Cant' wait until we get the chance to do something like this again.

Your needle book is lovely with such a nice finish! Kindest regards, Ronel

Sounds like a very fun class!!!!! Your needlebook looks wonderful!!!

You have had a good couple of weekends :-). Love the La D Da class piece, it's so sweet.

Oh, Cathy! How exciting!! :D I'm so glad you made it - what wonderful stitching things have been going on your life lately!! :D

Lucky you! How wonderful to take a class from one of your favourite designers!

Oh, you are such a brave soul to travel in winter. We had the southern part of same storm -- mostly an annoyance with the wind blowing the snow around.

Glad you arrived safe & sound and enjoyed your LM class. What a kewl project! Isn't she the nicest teacher? What fun to poke around a shop with needlework & quilting!!!

Hi Cathy, your needlecase is beautiful! Sounds like a great time and I'm glad the roads were good for your travels. :)

Wow Cathy, I love this piece and your finishing is wonderful. I'm glad you posted pictures!

What fun!!! Your project looks great and I don't blame you for driving in the snow to get there! I would have too - love, love, love la-d-da. The stitching angels have blessed you, for sure!

Well you lucky thing, you!!! I'm drooling that you got to go to that wonderful class. I love your project, and of course, AS ALWAYS (I've seen firsthand!) your stitching and finishing are perfect. It looks like ya'll had a wonderful time. Wow, getting to meet all these "famous" people and learn from them first hand....a stitcher's dream! {{{HUGS}}}

Beautiful finish! and what a treat to meet Lori:)
You really have had 2 exciting weekends!! Congrats!

You are one spoiled stitcher! :D
Glad you traveled safely to both destinations and back home again.

The needlebook is gorgeous, congratulations

I've taken one of Lori's classes before. She's such a wonderful instructor and designer! I would gladly sign up for another class by her if I had the opportunity. Glad you traveled safely there and back.

I LOVE this needlebook!! It's such a wonderful design, and the details are fantastic! Great job on the finishing!

Whoa! I am learning so much by reading your blog. I am new to the world of stitching and have been browsing various blogs to try and gain some knowledge and get some tips / ideas. I originally started with a stamped, then counted “kits”. I’m working on my 2nd chart and have noticed some big differences in floss types and quality.
My Cross Stitch Mentor has told me that I’m ready to graduate from Aida, but I really like Aida. Maybe it’s just beginner’s comfort???
If you would answer my question… What type of fabric or fabrics do you prefer and why? Brands and counts?
I would appreciate any advice, thanks!

What a fun time you must have had :)
I LOVE your class project :)

That sounds like you all had a great time. I just love the project you done in class! That is great!

How fun to see pictures of your pretty smiling faces! That is one special project. :)