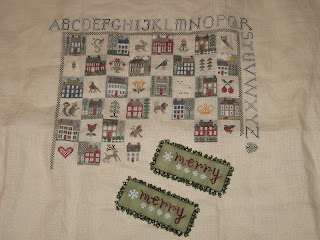 Yes, Sampler Game Board from The Drawn Thread is my old friend. Lelia and I started stitching it together on January 1, 2006. I originally planned to stitch it on 25ct Dublin (as called for in the design.) After stitching a fare amount of it, I made the decision in April of the same year to stitch it on a larger count fabric - so I started over! This time on 35 ct Ivory. I've stitched quite a bit on it since that time (as you can see) but grew tired of it and moved on to other projects. I pulled it out the other night and realized that I really don't have too much more to go - maybe three rows plus the rest of the border. I've stitched 5 or 6 new blocks since pulling it out on Sunday night and plan to keep going - maybe I could have this one finished by the end of the year? :)

I'm also still finishing Merry ornaments - these two are finished without the bells; I still need to add a hanger.

Thanks for stopping by!
Posted by Cathy B at 6:22 PM

Good job on the game board. Keep going:)

Cathy, Good job! This was one of my very favorite projects! I love this design and found it fun to do each little motif. I know you will love it finished. pam

The board is beautiful, You must finish it. What a beauty. I have done several of the merry ornaments myself. Pictures will be posted tomorrow. Your finishes are pretty. Happy Thanksgiving.

You don't have much left, I'm sure you'll be able to finish it easily by the end of the year. I have stitched this piece also, and it's one of my favorites.

Keep up the great progress on the game board, it's looking good. What are you planning to do with the Merry ornaments you are currently finishing? Are they going up around your home? Happy stitching to you.

Oh Cathy - I remember this beautiful stitch!!! Nice to see it coming to light and working again

I am showing Jeremy's grandma your blog right now - we really love the little ornaments and Granny says you sure do a good job. She loves the hardanger and tatting especially.

Congratulations on digging out an unfinished project. I think you should be able to get it done by the end of the year. I have many projects that I have not seen the light of day for a long time.

Have a wonderful Thanksgiving with your family.

You'll have yours finished and framed before I locate mine in the messy closet : )

It is a beautiful project - one to stitch one square at a time : )