My Trip to California

Last weekend I flew out to Los Angeles to attend the Scandinavian Festival at California Lutheran University in Thousand Oaks, CA. I had never attended this festival - wow - what a great event! Lots of entertainment, activities, and good food. I was actually invited to come and help demonstrate hardanger for anyone who was interested in learning more about this Norwegian form of embroidery!

Here are some of the sights at the festival. These first five pictures are from the opening day parade to kick off the festival. Note the colorful folk costumes. 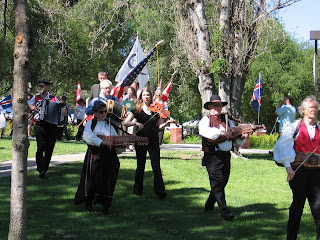 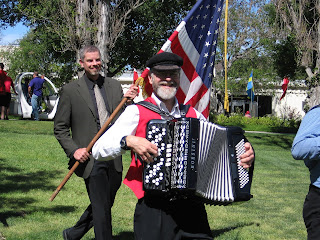 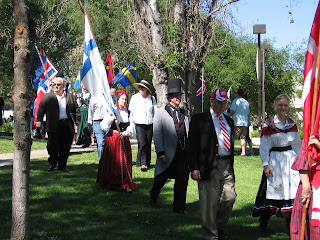 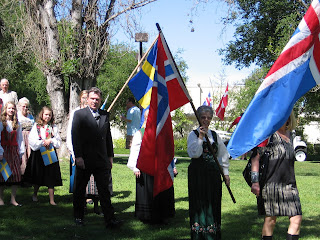 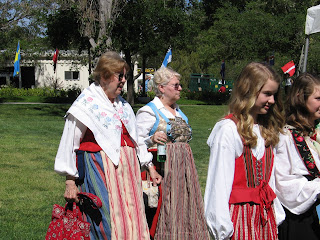 After the parade around the festival grounds there was an opening ceremony and the national anthems were sung for the U.S. and each of the Scandinavian countries.

There was a large tent in the middle of the grounds; this is where several different demonstrations were located, including bobbin lace, knitting, spinning, weaving, rosemaling, wood carving, and bunad making. Oh, and hardanger too!

Here's one of the lace displays (sorry for the reflection): 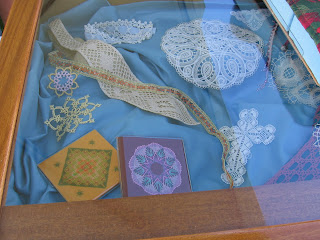 And here's a woman making lace (note the spool of lace at the
top of her board!): 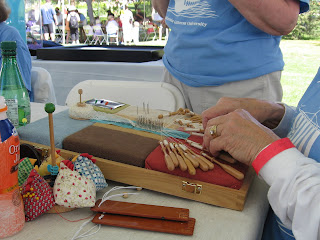 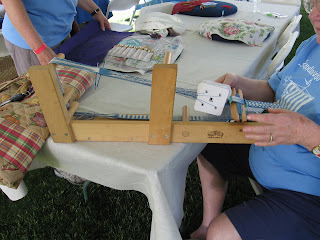 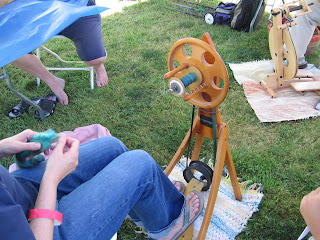 Here's a collection of Rosemaling pieces: 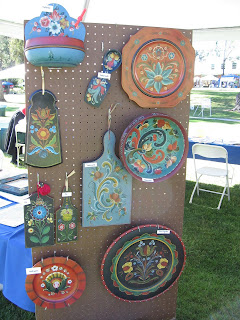 These last two pictures are from the bunad or folk costume making demonstration; note the beautiful embroidery on the collar and the cuffs of this blouse: 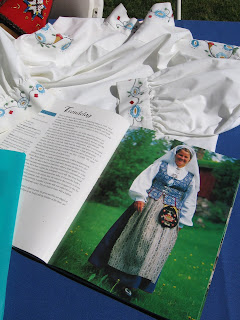 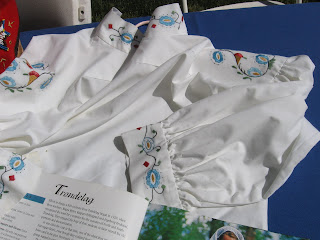 The only sad thing -- I didn't take a picture of my hardanger display! But I enjoyed meeting with many people who were interested in how a piece of hardanger is created. I had taken a number of finished pieces with me, but also had several doilies that were in various stages of completion. A couple of people even tried their hand at trying to stitch some kloster blocks!

Here's one more fun photo of the musicians and others leading the May Pole procession. It was a fun weekend! 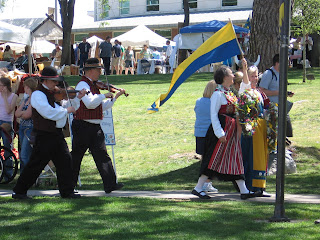 What an interesting festival to attend, it sounds like you had a brilliant time. I bet you inspired loads of people to go and research hardanger a bit more after seeing your display. Best wishes and happy stitching to you.

Your festival sounds so interesting! It's great to hear that some of these arts are still ongoing and have not been completely lost. Beautiful work!

It looks wonderful! How fun that you got to be part of such an interesting demo area. I would have loved to be there. And the costumes too! What a great festival! Thanks for sharing pics with us!

How fun! Looks like a wonderful festival and it reminds me of our Nordic Fest.

Cathy, my oh my you do get around Girlfriend. Looks like fun and got you into some warmer weather. It brought back memories as when I was in 6th grade we had to perform the May Pole Dance for our whole school and parents. Each girl was to wear a dress the same color as her fabric to be woven .... it was a hoot! A Wonderful Happy Memory for me. Lots of practice to be perfect! Glad you enjoyed it! pam from iowa

That is really cool! What a great festival to have. I had not heard of some of those art forms, and I was really glad that you showed examples of them. I have a kit to teach me how to bobbin lace which I will someday try. When, not so sure....

Glad you had such a good time, and great weather.

Cathy, what a fun and interesting festival. I love seeing all the pics of the different crafts being done. Sounds like you very much enjoyed it!