Well, since I don't have any stitching pictures to share, I thought I'd show you the project my husband has been working on for a few (actually, several) years. He does auto body work for a living, but his real passion is restoring old cars.

When I met him, he had a 1935 Chevrolet Master Deluxe that he drove around. It was completely restored (with original parts if I remember correctly.) He always wanted to have a 1952 or 1953 Mercury though. With two kids we couldn't afford to have two old cars, so he sold the 1935 Chevy to fund his "next project." One weekend he drove out to South Dakota with a flatbed trailer that he borrowed from work and he brought it home. It had been sitting in a barn for the last 30 or 40 years so it didn't have too much rust on it (but it had a number of dead animals in it!)

So he's been working on this "little" project on and off for the past "few" years and this summer, it's finally driveable. He has spent many Friday and Saturday evenings at various car shows and outings in the Twin Cities and loving every minute of it. 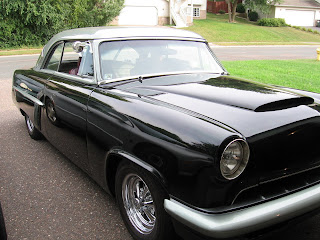 Can you see the green flames that are painted into the front hood? You have to look at it at just the right angle to see them! (Oops, didn't realize you'd see my reflection in the hood too!) 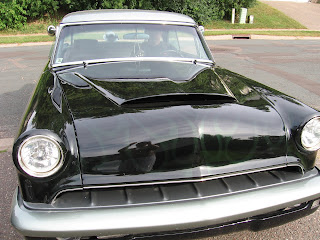 The interior still needs to be done; it's something that he can't do himself, so it will continue to be a "project" for awhile longer. He's having fun though.

Great photos! I love old cars too. brings back good memories. I went to stitchville today, and picked up 3 boxes that I hadframed. I also bought 12 NPI's for my Chatelaine project, medivial town mandala, now I have everything to start! love reading your blog. thanks. shelley reynolds mahtomedi minnesota.

That is terrific! I wish my DH had some kind of hobby like that. He does periodically get out the stamp albums and work on that...

Gorgeous car! The finish is amazing!!! Isn't it fun to have a passion!! Congratulations to your husband!

My DH has a 57 Chevy pickup in the garage waiting for him to retire, lol! He enjoys old cars, but lately he just takes pictures of them at rallies. :D

The Merc looks terrific! Congrats to your husband!

I have a soft spot for old cars too. I have one of my own that is a labor of love. Tell your honey, it's a beauty!