After I hit "Publish Post" yesterday, I thought of a couple more things I wanted to share with you.

First of all, I want you to see this cute acorn scissor fob that we received as a gift at the retreat. Pat (of R&R) stitched them (about 100 of them!) and some of the shop employees helped with the finishing. The picture doesn't really do it justice; it's really cute! 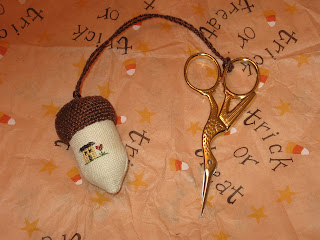 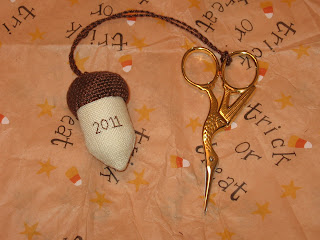 And, while in Virginia Beach, I received a gift from Pam in Iowa (some of you may know her as "PJStitcher" - she doesn't have her own blog, but she comments on a lot of blogs.) Pam and I met last year at the Silver Needle retreat; then in November she came to Minneapolis for a weekend and I met her at Stitchville for some stash enhancing. Check out this scissor casket that she made for me! 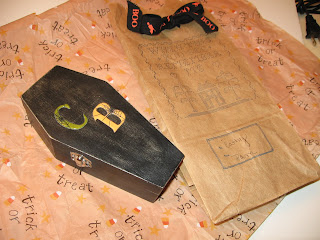 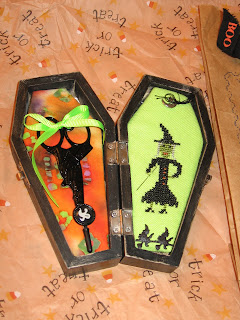 Pam always says that she isn't very good at finishing, but she did a great job with this project. It might be hard to see in the picture, but the witch has a needle in her hand! On the left, stuck to the witch scissors, is a needleminder with a ghost on it. It's pretty cool! Thanks Pam!

I had to take a picture of the gift bag that she used. It was a simple brown paper lunch bag, but it had a sampler pattern stamped on the outside! 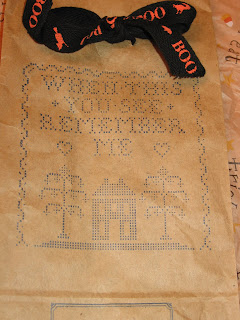 I'm having trouble settling on which project to stitch on right now; too many choices! Should I work on Jenny Bean Christmas Sampler (and knock off another Crazy Challenge piece?) Or should I work on one of the projects from the retreat? What I really should do is work on some Christmas ornaments! Well, stay tuned...I'll report later this weekend on what I decided.

Happy Stitching!
Posted by Cathy B at 8:40 AM

You received such wonderful presents! :o)

Love the fob and the casket... great gifts.

OMG those are beautiful hun; I LOVE that scissor fob....

Mindi said...
This comment has been removed by the author.
9:16 AM

I love the scissor casket, its amazing. My vote is for Jenny Bean, just because I want to start mine, but I'm holding off.

I love the acorn! What wonderful gifts. Such talent!

What a cute acorn fob to receive! Pam's casket gift to you is incredible! I love the gift bag she created as well!

P.S. I vote for ornaments!

I love the scissor casket! What a brilliant idea. The acorn is very sweet too. I look forward to seeing what you'll be stitching on next, best wishes.

Gorgeous gifts! The stitching on the fob is sooo tiny! And the casket is amazing! Pick whatever project will be most fun...

Amazing gifts! Pam did an awesome job on the finishing of the casket scissor case.
Of course, I'm in favour of the Jenny Bean for your next stitch. I'm having so much fun with mine!

A great final post about the retreat. And I'm sure you could tell us a lot more. Woncderful gifts you've received.
Now I'm curious to see what you chose as your next project.