Hello Friends! I've just returned from three days of stitching bliss! Some of my stitching friends have been getting together on this weekend every year for the last several years at the Belisle Ranch Retreat. This year, I was able to join them. The ranch is about a 1.5 hour drive, just across the border in Range, WI.

We arrived at "The Ranch" on Thursday afternoon at 3pm and stayed until about 11:30am today. We cross-stitched and ate and cross-stitched more. The meals were fabulous (not to mention the fact that they were cooked for us!) The accommodations were very comfortable. Here are a couple of photos of our stitching room; you can see that many of the stitchers were hard at work! 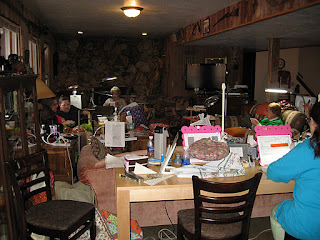 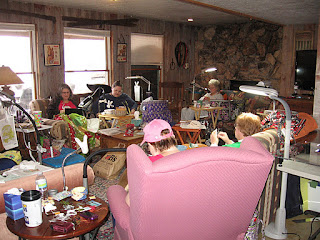 During the weekend, I managed to finish three projects; one is from my WIP basket and two are from the basket of smalls that you heard about at the beginning of the year. I also have one other WIP that I worked on extensively - it's not finished yet, but I put a really good dent in it and hope to have it finished soon.

Since it's late and I'm ready for some shut-eye, let's get right to the stitching photos! Here's the finish from the WIP basket. I'm sure you will recognize it; it's from the Cherrywood Designs Dictionary Series.

From the basket of smalls, this LHN design from the Nashville Needlework show in 2011. I also purchased the needlebook and pincushion; I think there is some finishing in my future! 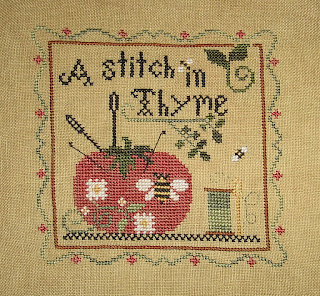 The third finish also came out of that basket of smalls; it's the 2011 Shepherd's Bush scissors fob! Can't seem to escape that finishing work! 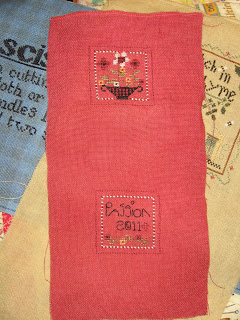 The other WIP that I spent a significant amount of time on is one I started back in 2005. It's the EGA Mystery Sampler and is done as a band sampler. I got about a third of the way done (back in 2005) and got stuck. I needed a little encouragement (okay, maybe it was a shove) to get this one going again. I'll share a picture of this one next time.

Before I go, let me share with you a picture of Buttercup - she was the resident cat at the ranch. She was super friendly and constantly monitored our work. Buttercup liked getting cozy on our laps and she especially liked napping under our stitching lights, but as you can see in this photo, Buttercup also took a liking to one of these stitcher's lap trays! What a silly cat! 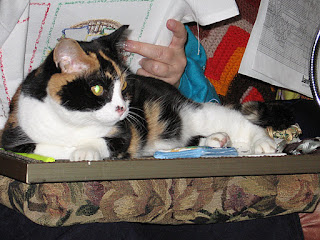 lovely finishes. Congrats.
Glad to hear you had such a great time

Great finishes - congrats! Sounds like a great time, good for you.

Wonderful finish! Congratulatiions. It sounds like a fantastic weekend.

I swear, life is pointing me more & more to Wisconsin! We are selling out home this year & have considered Wisconsin many times (used to live over the border in the UP for several years). Always loved the state. So glad you had fun at the retreat & your finishes are wonderful! Blessings, Shirlee

A great good time! You did fantastic, beautiful work!

Looks like you had a wonderful weekend, you got a lot of stitching done :)
That cat is very funny.

Looks like a great weekend! Love your finishes -- so pretty! And yes, cats can be very silly about where they want to be. lol! Glad you had fun!

Cathy --
Sounds like you had a wonderful time! Great finishes too

Looks like you had a great weekend. I'm off to check out the Belisle Ranch!

Congratulations on having such a fun and productive weekend. All the pieces look terrific!

Lovely finishes and the retreat sounds wonderful. Glad you enjoyed your weekend.

The retreat looks great! Cozy room plus a cat-who can ask for more?

Looks like a fabulous weekend to me :-). Great finishes too!!!!

always wanted to visit WI - your retreat sounds heavenly. Lot's of fun going on there. Enjoy your week ! Melody

oh my word you did some amazing stitching over the weekend! Congrats!!! Looks like it was alot of fun!!

It looks like you had allot of fun. Great work on your projects.

TFS-- Love the picture of Buttercup.

It was very productive indeed! You're doing great at those smalls Cathy. I'm looking forward to seeing your pics of the band sampler too.
It looks like it was a wonderful retreat! Love the pic of Buttercup. Cats can be a lot more social than we give them credit for.

Looks like a great time was had by all! Thanks for sharing your finishes. They look great!

Wow! You were busy. Great fiinishes. Sounds like a great time.

Lokks like lots of fun. I love retreats. I just need to win the lottery to attend them all. I should play first though! Love your projects, especially LHN.

The retreat looks like so much fun! I love your finishes. LHN Fresh from the Garden is super cute!