It's hard to believe that January is almost over! I had so many grand plans for stitching this month.  It's hard to find time though when there are so many other things going on.  I'm glad the weekend is here and I am hopeful that I will be able to put needle to thread for a significant part of it!

I have been working on this small project during the month.  I always find it easy to stitch letters and words; they don't require a lot of concentration (like over one stitching or motifs with multiple color changes.)  So this little project has traveled with me to Chicago and Phoenix and I also worked on it at our needlework guild meeting on Tuesday night. 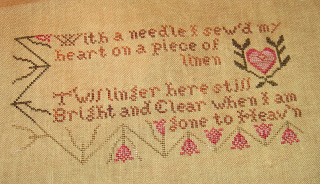 Recognize it?  It's called "I Sew'd My Heart" from Heartstring Samplery.  She offered this pattern to stitchers who were willing to take pictures of her website in interesting places and then send them to her.  She was collecting them and put them up on her blog.  You can see her collection here - My Heartstring Around the World - pretty cool idea!

We took a picture of her website header at the Minnesota State Fair in 2011. (Yes, I've had this pattern since then.)  It was hard to get a good photo because it was a really sunny day and things were reflecting in my daughter's iPhone - plus we really couldn't see what the photo was until after we took it. 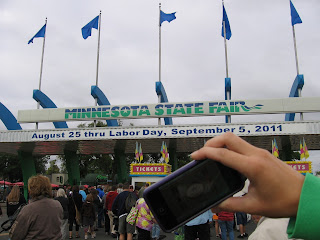 It seemed appropriate to include a Pronto Pup (like a corn dog but better) in the shot since everything at the fair is on a stick! 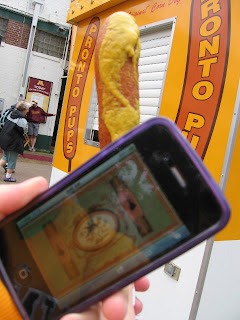 Not a perfect photo, but you get the idea!  Beth from Heartstring was pleased with them and that's all that matters!

Well I guess I better get moving -- have a nice weekend!

So lovely! I like this design so much and was planning to do this last time I was at a special place, then I forgot to do it, lol! Guess I needed to tie a string on my finger! Very pretty.

What a lovely start! Every now and then I remind myself that I have to send Beth a picture, then I promptly forget :-) It's such a fun collection of pictures.