When Amy Mitten announced that she was going to do a series of samplers based on designs from samplers from different areas of the world, I knew I was interested. When I found out a passport was involved and that we would be traveling to a new destination every 80 days, I was sold!

I have had the travel bug since I was a young child. My Auntie Theresa used to take me on road trips. We took many trips, usually to Colorado. One time we drove all the way to British Columbia. Auntie Theresa also introduced me to airplane travel. We took many flights back in the day when it was a privilege to fly by airplane.

The travel bug stuck with me. In college, I spent two semesters living in Germany and had the opportunity to travel to numerous countries in Europe. One of the best experiences of my life! After college I became a travel agent and that job allowed me to travel to many places I never ever thought I would get to like Alaska, Hawaii, the Cayman Islands, Japan, and China.

I still travel a lot for my current job, but my destinations aren't always as exciting as the places I visited in my youth. I feel so fortunate to have had so many opportunities throughout my life to visit different places and experience so many different cultures. You know what? When you travel, you also have a greater appreciation for home and great pride for a nation where we enjoy so many freedoms.

Back to the samplers...I think you can understand why the theme is so interesting to me. I signed up along with about 20 other stitching friends. Our first excursion.... Scotland! According to Amy, this sampler design was inspired by antique Scottish samplers from 1740 to 1840. The colors in the sampler reflect those that would have typically been used in Scottish samplers.

My sampler is personalized with my father's and mother's initials. My grandparents initials are also included, along with my initials and the initials for my four brothers. This was such an enjoyable stitch! 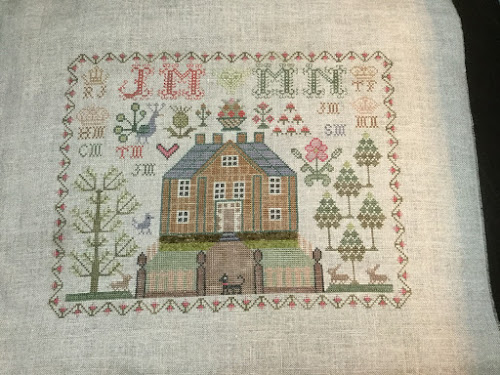 Have Passport and am ready for my next excursion. 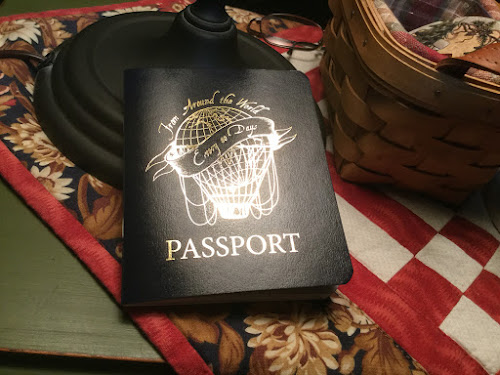 Posted with Blogsy
Posted by Cathy B at 10:01 PM

A wonderful finish. And a great plan for further stitching trips.

What a great idea for a series of Samplers.
Your Sampler turned out so pretty.
Congrats on your finish.
Marilyn

Lovely. Your posts have inspired me to apply for a passport. Amy Mitten is new to me. Looking forward to seeing her threads and getting started. Thank you for all the great pictures of your work in progress.

Too awesome for words.

I adore the Passport idea, too -- enjoy the ride / traveling

Your finished sampler is beautiful! Love the colors on this...

The sampler finish is beautiful! Love that you incorporated family initials. I had no idea it was part of an Amy Mitten series, so I now look forward to seeing more of your stitching travels!

Beautiful finish! And a lovely back story to go along with it. How lucky you are to have seen so much of the world!!

Cathy, it's a masterpiece! Wowsers. Those colors are incredible.