I started the New Year with a new project. For the past three years, Linen and Threads, a needlework store in Australia, has published a complimentary mystery sampler design on their website. The first three didn’t really call my name, but this year’s design intrigued me and so I decided to join in the fun.

On the first of each month (actually, the last day of the month due to the day/time difference between the U.S. and Australia) they publish a portion of the design. Between yesterday and today, I was able to stitch January’s installment! 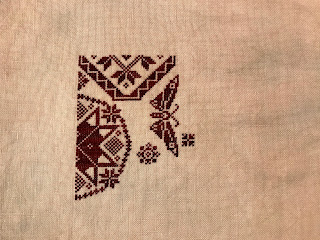 Here’s an update on an ongoing WIP (work in progress) that I started back in 2017. It’s from Satsuma Street and it’s called the 12 Days of Christmas. Between Christmas and New Year’s Eve I stitched the Eight Maids of Milking block.  As you can see, I have two more blocks to go. 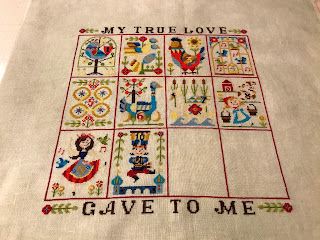 Not making any promises, but maybe I’ll show up a little more often on this here blog.  Happy New Year!
Posted by Cathy B at 10:07 PM

What a pretty SAL! I agree...how can you not join in the fun when it’s that gorgeous? Fun way to start the new year. Your 12 Days piece is beautiful. Such neat and careful stitching. Well done! I love the colors. It’s going to be such a nice addition to your holiday decor when it’s all done.

Ooh! That mystery sampler looks intriguing. I'm tempted to join in the fun!

Your start on the Linens and Threads mystery SAL is super! What fabric and thread are you using? Your 12 Days piece is looking good! Happy New Year!

I love your new start! I love colour, I love sample.

So glad to see you posting again. You have been missed!