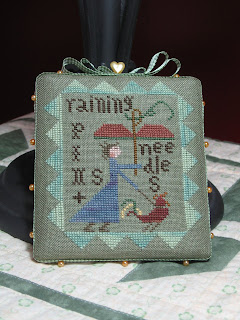 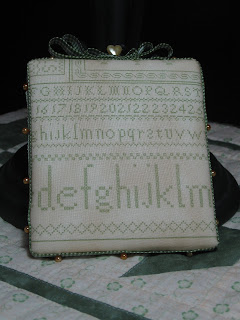 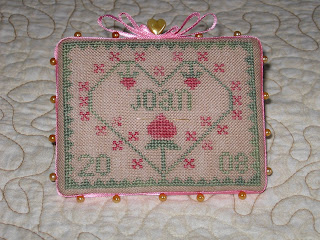 Have a great Saturday and thanks for stopping by!
Posted by Cathy B at 12:19 PM

Hey Cathy...I just LOVE Mary Garry's designs~your pinkeep is fantastic!!! I just finished a MG design and sent it to Heather (quilt or stitch) for her birthday...am stitching it again now!
You also did a great job on the pinkeep for Joan.
Off to check out Amy's blog.

It rains year-round here in the Netherlands, so you're safe with rain as a subject for any season. LOL! It really snowed out by your place?? Whew, it makes the rain seem okay in comparison!

I love your stitching. I'm so glad you posted - I've really enjoyed the pictures!

I just love both of the pieces you finished. The ABC fabric is just wonderful. Where did you find that?

Love the Mary Garry design! You did a fantastic job on the stitching and finishing. You've got me hooked on these MG designs, now. Thanks for the ones that you sent me. They are in my to do pile. The pinkeep is great, as well.

Those are lovely pinkeeps! I bet they will be well loved by their new owners!

I so enjoy you pictures. You do beautiful work.

The pinkeeps make me want to hurry and finish the piece that I'm doing, so I can get busy with one for me {she says} while drooling over yours.

That was really nice of you to mention my blog on yours. You're so sweet.

wow with this lot your willnever lose your pins lol beautiful

That is beautiful. Great work!

Gorgeous finishes!!! I cannot believe we are almost up to round two of Seasonal Exchangers already - where did the year go? Joan must love the gift :-)

I love the raining pinkeep!

Your finishes are beautiful!

Lovely pinkeeps all around...I especially love the Marry Garry...but you cannot find fault in the Joan one either...unless I could say...it should say Vonna :)
JUST KIDDING! LOL!
Amy is a sweetheart isn't she?

They are both beautiful! I just love the one you stitched for Simone, what a great design and lovely finish!

Beautiful finishes! I love the sawtooth border around the Mary Garry piece. So cute and the variegation is wonderful. Great job on both pieces!

Cathy glad to see you posted the pinkeep, I still need to get it on my blog because I just love it.

Thanks so much for the great birthday
gift.