The weather this year has been crazy. Our temperatures have dropped down into the 50's and it is raining for the third day in a row now. Things are supposed to clear up later today and the weatherman says we have a nice weekend ahead. I hope so!

I thought I'd share one more framing purchase with you; this one, however, is not needlework related. It is my grandmother's and grandfather's wedding certificate. My grandfather immigrated to the U.S. from Hungary in 1904. He came from a small village called Wallern; today it is located in Austria just across the border from Hungary. My grandmother immigrated to the U.S. in 1906. She crossed the ocean at the age of 16 all by herself! She came from another small village in Hungary called Tadten. This village is also now in Austria; just across the border from Hungary.

As best we can tell, the two of them met here in the U.S. Chances are though that the families might have known of each other in Hungary. They married in 1908 at St. Bernard's Church in St. Paul, MN. This elaborate marriage certificate is written in German (you should be able to click on it.) 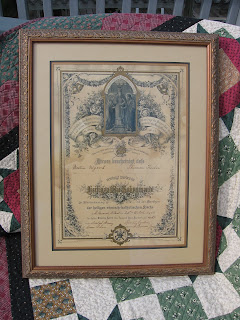 My brothers and I grew up in the house that my grandparents built. Many years ago (I was still single and living at home) I found this certificate and a large portrait of my grandmother in the attic on the floor! Naturally I retrieved them and found a more suitable place for storage. I have kept them both and carefully stored them over the years.

I decided it was finally time to properly frame and preserve this marriage certificate. It still shows it's age and the heat/cold/water damage that it endured over time, but I like that about it. The framing manager helped me pick mats and a moulding that complemented the color and design of the certificate. Now it hangs in a place of honor in my home.

Here is a picture of the two of them on their wedding day, October 20, 1908. My grandmother was 18 years old and my grandfather was 26. 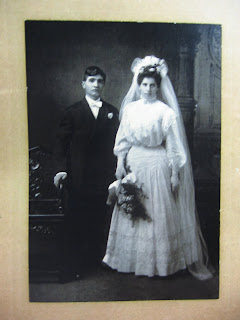 Well, that's enough family history for today. More to come though...
Posted by Cathy B at 7:19 AM

My sympathies on the weather. We've been having nothing but rain and clouds as well. I'm quite sick of it! Fascinating story about your grandparents. I love how their wedding certificate came out, and their wedding pic is so cool too!

It has been a dreadful summer hasn't it. The forecast here for 5 days is rain. At least it is good stitching weather.
It is wonderful to see your family history preserved. So many people have no appreciation for the past. I hope you frame your grandparents wedding photo to go with the certificate. The wedding certificate is beautifully framed. The mats and frame suit perfectly.

Same bad weather here. It rains a lot this Winter. The creeks started to overflow. But...we can't complain. Everybody who dares it here to complain about rain gets the evil look...lol. We had couple of years of drought here.
Love your story about your grand parents. Great to have such a piece of family history framed. Your grandmother looks gorgeous on her wedding day.

What an amazing wedding certificate. A far cry from today's computer-printed flimsy pieces of paper that don't look too different from the junk mail announcing you've one a million dollars/new Jeep/etc. LOL. I'm glad you've preserved it.

Our weather is all over the place. Days of rain and cold temps, then it gets hot and humid... today is gorgeous, I must say, and I wish I could share it with you.

What a beautiful marriage certificate and absolutely, perfectly matted and framed! Love it. Don't you wish they still did beautiful certificates - they're so plain and downright ugly these days.

We've had a ton of rain, too. Seen any arks lately?

What a wonderful thing to have hanging in your home! I love it! I also hope you frame the photo to go with it. I have a mix of older family photos and samplers with houses in them on my walls in my family room. Seems to help the theme of home and family I want there.

Very nice way to save your personal history! It is wonderful that you know all that - can't say as I do. I am not sure I could even find it out now. Sounds like you have had tough weather we had bouncing tornados go through our town last night - scary!

What a beautiful marriage certificate! The framing is just perfect for it too. I think it's wonderful that you framed it instead of having it hidden somewhere. It truly is a work of art! Wish they still did them the same way.

It's been raining here too. I'm getting a little sick of it myself!

Thank you very much for sharing your intriguing family history. My family is in the process of sorting out my great-aunt's home and we're finding all sorts of treasures. All the best.

I love it! What a treasure and so beautifully framed. Love the pic of the grandparents as well.

Weather here is dreadful as well...

The rain continues here through the weekend so I should be able to get some stitching done. We have needed it but not this much. This is the 4th day of rain now!
You are so lucky to have such a lovely piece of your family history as that wedding certificate. They did a lovely job on the framing.
Your grandmother's wedding dress was gorgeous!

thx for sharing! Your photo is so interesting to look at - and the flowers w/bow, dress, what a special day for them.

If interested, you can view a photo of my paternal grandparents

How lovely is the picture of your grandparents--by your description of where they where born and their names, it's sounds like they were Donauschwaben. There is a lot of interesting history in that region.
Thank you for sharing.