The Fruits of My Labor

It has been a positively wonderful long holiday weekend!  The weekend started with another trip to the Minnesota State Fair; my daughter and I had tickets to the Grandstand show on Thursday night.  The show included performances by Eden's Edge, The Eli Young Band, Little Big Town, and Rascal Flatts.  I was worried about the weather and thought maybe I was too old to sit (actually stand) through a four hour concert, but I must admit, I did enjoy it.  The weekend is now almost over and we are enjoying a quiet day at home.  Tomorrow, we all go back to work.

Yesterday, I completed a bit more finishing.  I'm starting to see my way to the bottom of the finishing basket. Here are my completed projects...

First up...a needlebook finish for my friend Judy.  The coordinating pincushion and fob were finished on my last finishing day.  I will be able to pass these on to Judy when I see her next weekend. 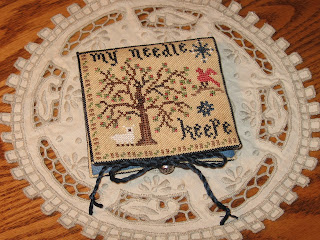 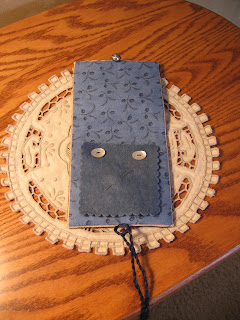 During the week  I stitched up these small designs (over two and over one); this was a kit that I had purchased from Jackie du Plessis.  Two small containers for storing buttons, beads, needles - whatever I wish! 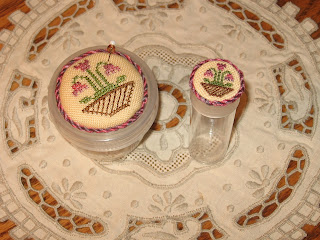 And, a Christmas Ornament!  This was in my WIP pile for a long time; I stopped when I got to the over one stitching.  Over one doesn't scare me anymore though - ha!  The design is called Peace and Joy and it was a kit from The Drawn Thread.  Here's the front and back: 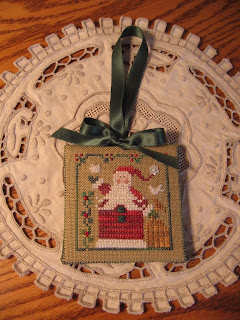 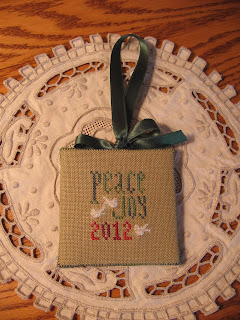 I really liked the finishing instructions that came with this design from The Drawn Thread.  The finished edge was done with a nun's stitch and rather than stuffing the ornament, it called for two pieces of skirtex cut to size.  The end result is a flat ornament that retains its shape.

And, last but not least, my favorite finish of all....a couple of hornbooks.  Believe it or not, I stitched both of these on Saturday.  The design is from Crown & Thistle and is called Friends Pins and Threads...it was their exclusive kit at the Dyeing to Stitch retreat in 2011.  I believe the patterns are now available to all.  Rather than using DMC, I used similar overdyed flosses.  I'm really happy with how they turned out! 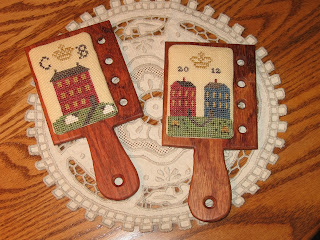 I've been busy stitching away on another design from Ruth Ann Russell; you saw a little bit of it in an earlier post.  It's almost finished, so in a day or two I will share a final picture with you.

That's it from me today...just enjoying the holiday...I hope you are enjoying your day too.  Thanks for stopping by!
Posted by Cathy B at 12:16 PM

I'm always inspired by all your beautiful finishes.

Wow! I am serious when I say you must stitch quickly. I must be doing something wrong. I don't know. I am using a lap frame and two hands. I just cannot stitch that quickly. :(

Great job on all your projects--it's amazing what you can get done when you're in a "finishing" frame of mind. I especially love the hornbooks! Thanks for sharing!
Stasi

What a wonderful group of finishes!! You have done quite a bit!!

What a great bunch of finishes, well done!

I want to go to a really great country fair but the few that are around here are way too small...nothing much to offer.

Your many finishes are beautiful...as always. I love your hornbook finish!

All of your finishes are just gorgeous. LOVE those hornbooks. And wow, you are fast.

All are beautiful finishes! I especially love the hornbooks. Great job on all of the finishes.

What a great way to spend Labor Day Weekend. Your finishes are beautiful.

I don't know if I can pick a favorite, they're all so great!

All your finishes are beautiful. Love the hornbooks.

Cathy ~ all of your finishes look fantastic! I cannot believe you stitched those two pieces in one day!

Wow, I love all your finishes! Just wonderful! Glad you had fun at the fair too!

Everything is so gorgeous!!!!!! Congrats on all the finishes.

You do some lovely work.

Oh my gosh, what a feast for the eyes, love all of your finishes! You do great "finishing" as well :-)

Great finishes Cathy! I particularly love the Santa ornie. I'll have to try finishing with Skirtex one of these days.