In between Ellen's classes in LaCrosse, WI and a trip to Indiana this past weekend (which I will tell you about in my next post) , I had to make a quick trip to New York City.  This trip was for work and so much of it was spent in meetings and on visits with customers, but we did have a little bit of fun.

This was only the second time that I have been to New York; the last time was in 1999. When I was there before I saw many of the landmarks but had not seen the Statue of Liberty.  This time I was sitting on the correct side of the plane and as we were approaching LaGuardia Airport there she was in the New York harbor!  Wish I would have had a camera handy.  It was truly a highlight for me.  Made me think of my grandparents and what they must have thought and felt when they immigrated to the US in the early 1900's as their ships approached New York.

The first night we were there, we had dinner at the Friar's Club.  What a cool place!  It's like a historic castle in the middle of New York City!  We didn't see any famous actors; just enjoyed a good meal and had a lot of fun looking at all the pictures that are hanging on the walls throughout the club -- Dean Martin, Frank Sinatra, Sammy Davis Jr., I could go on and on...

Picture is fuzzy, but this banner hangs in one of the rooms in the building: 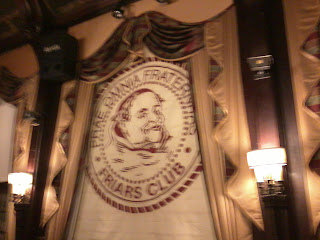 The second night we were there, we went on a tour of the city on a bus called "The Ride".  It was a very interactive tour.  At various points along the way the bus would stop and we would interact with the crowd outside (and a couple of employees who were planted in the crowd). 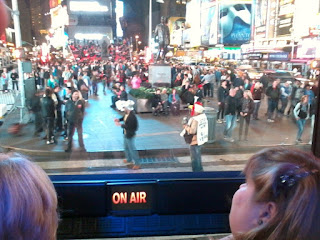 Lights, lights, and more lights! This truly is the city that never sleeps! 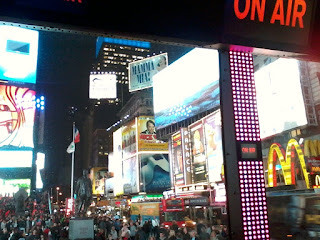 Here we are at Times Square...it's like 8:30pm and look at all the people! 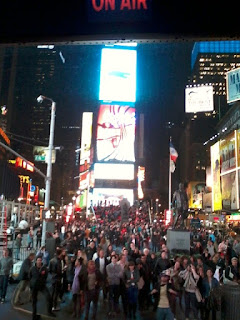 For the brief time I was there, it was a nice visit.  I arrived home on Thursday night with enough time to swap out my business clothes for some comfy, casual clothes -- will be back on an airplane at 7am the next morning for a flight to Indianapolis!
Posted by Cathy B at 9:17 AM

Glad you had fun in NYC! It's a wonderful city to visit!

Wow! You've really been the traveler these past weeks! NYC is lots of fun to visit! Sometimes I think it would be neat to live there. But I don't know. lol! Great pics!

It was fun seeing the New York photos. I have never been there.

Wow, you timed that trip just right! Glad you got home before Sandy arrived.

Did you make it to the garmet district? Lots of dupioni silks, trims, ribbons, buttons, etc.

Wow, you timed that trip just right! Glad you got home before Sandy arrived.

Did you make it to the garmet district? Lots of dupioni silks, trims, ribbons, buttons, etc.