After a little birthday detour we return to my travels in Austria and Hungary. All these posts and pictures makes it seem like I was there a month, but in reality it was only five and a half days.  I've enjoyed having something to blog about for the past week!

In that today is the first Sunday of Advent, I want to share with you in this post some pictures of Vienna.  What's the connection?  Well, it's customary in many cities and towns in Europe to host a Christmas Market (in Germany and Austria they call it a Christkindlmarkt) during this time.  I have fond memories of visiting these when I was a college student studying in Germany.  Many of the ornaments we put on our tree each year are purchases that I made at various markets throughout Germany.  The markets generally open the first weekend in Advent and are open until Christmas.  There are a few markets that open earlier to accommodate tourists.  Vienna, being such a large city, has 10 or 12 markets; a few of them were open already.

Vienna is probably one of my most favorite cities in all of Europe.  Each time I visit my relatives in Austria we make at least one trip to Vienna.  It's just an hour's drive from where they live and they like the city too.  While it is a large city, it doesn't really have that "big city" feel to it.  It's not crowded, the people are friendly, the architecture is so interesting, there's so much history - I just love it.

We almost always go for a walk on Kärtner Straße; this is a "pedestrian only" zone.  Lots of familiar and not so familiar stores. 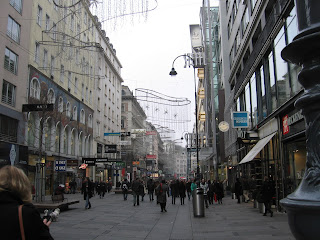 A popular landmark in Vienna is Stefansdom (St. Stephen's Cathedral).  It's always being worked on; but important for preservation purposes! 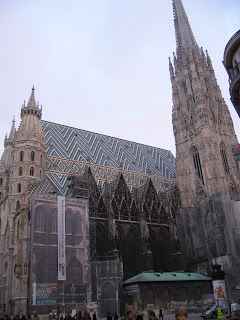 This building was particularly beautiful (the top two thirds, ignore the McDonald's signs!) 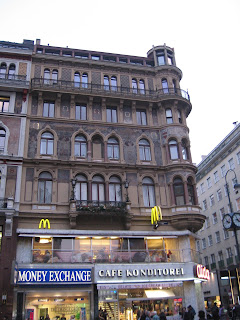 We grabbed a quick bite to eat from one of the street vendors (this brought back fond memories of my college days too!)  My cousins, Martin and Ilse, are in the second photo... 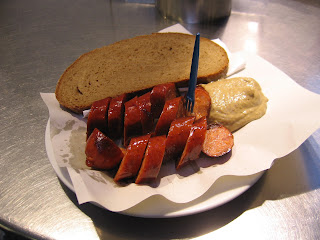 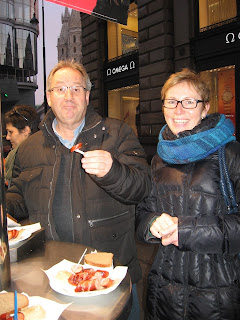 Lots of decorations in the shop windows and many Christmas lights on the streets. 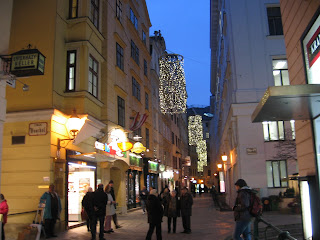 We then came to our first market "Weihnachtsmarkt Am Hof."  This was a smaller market. 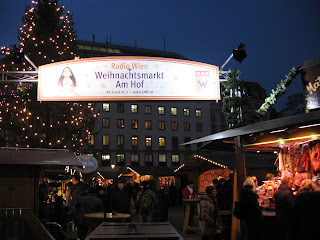 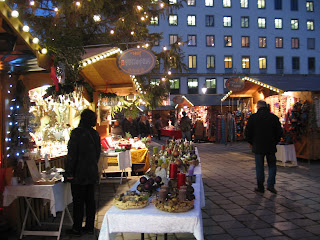 After a bit of shopping we moved on to the larger market in front of the Rathaus (city hall).  This is the one that most of the tourists go to - the "Wiener Christkindlmarkt." 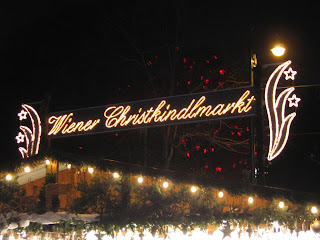 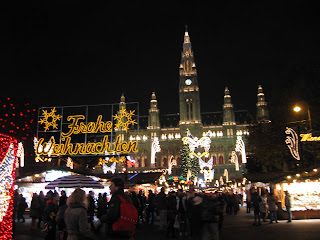 I have to be honest, the markets today are much more commercialized than I remembered them being in the early 1980's.  Just like everything else, things change I guess. I still managed to make more than a few purchases!

As we walked back to our car, I snapped a few photos of some of the beautiful, stately buildings in Vienna, all lit up beautifully in the night!

The Burgtheater or Burg Theater 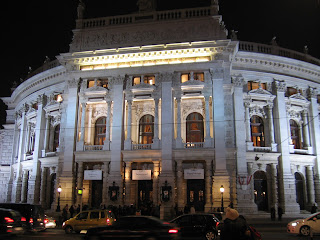 I don't remember which building this is! 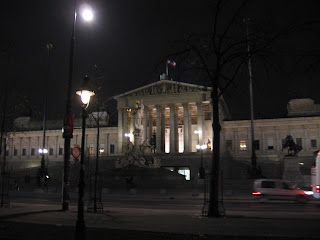 The National Library in Vienna - stunning at night! 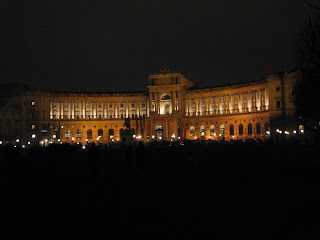 I wish you all peace and happiness as we all prepare for the upcoming holiday season.

What a beautiful city. It's too bad the markets have become more commercialized. I guess it's not surprising though, if sad. It's nice that you got to relive some memories from your college days. I loved seeing the buildings and markets lit up at night.

What a wonderful post Cathy. Thanks for taking me on this trip with you.

I have really enjoyed reading all your posts about your holiday. Thank you!

We were fortunate to be in Austria and Germany one Christmas several years ago. Thanks for bringing back my own happy memories!

Wonderful photos, Cathy! I've always wanted to go to Vienna. The neighbors who live next to my parents' house, whose kids were our playmates when we were little, are from Austria. I remember going over to their house at Christmas time and marveling at the different decorations. I also remember eating chocolate decorations from their tree--that was always a nice bonus. LOL One year I hope to go to the Christmas markets in Austria.

Really enjoyed the photos and bit of history. Thanks for the tour of this beautiful place.

What a beautiful city! I have always wanted to go to Austria and Vienna in particular. I've never seen markets that are open in the evening. They're so pretty with all of the lights. Thanks for sharing your pictures!