My stitching time has been limited this week. It's State Fair time in Minnesota. My kids and I spent the entire day on Sunday at the Fair. Here in Minnesota, we joke about how everything at the Fair is served on a stick - Pronto Pups (aka Corn Dog on a Stick), Pork Chop on a Stick, Key Lime Pie on a Stick, Macaroni and Cheese on a Stick, Spaghetti and Meatballs on a Stick - you get the idea! Vendors spend the entire year trying to figure out how to put new food items on a stick!

The Hardanger piece that I entered did not place - that's okay - this was the first time I've ever entered anything and it will be interesting to see what comments the judge has for me. There were some really beautiful pieces including a round Hardanger doily (about 30" round) that included four stitched Stavkirches and four stitched Viking Ships in the design. It was truly amazing.

My daughter entered a cross stitch piece of a labrador retriever. We mounted it on a pillow (the pillow fabric had paw prints on it). She won a blue ribbon for her work! After the Fair, I'll be sure to take a picture of it and post it for you to see.

So, the Fair combined with back-to-school shopping has taken up much of my free time. I did start a new project the other night - Cedar Hill Country Pumpkin Farm. I was in the mood for a Fall design. I'm also drawn to pictures of barns. Here's my work, followed by the picture included with the pattern. 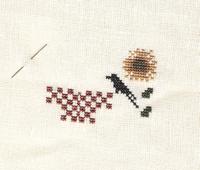 Tomorrow is Wednesday - Happy Hump Day!
Posted by Cathy B at 7:38 PM

That's a cute fall design Cathy! Your blog is so inspiring! Now I can't wait to see the fair pics.

I love the fair. It is our family favorite thing to do ; ) Enjoy eating off sticks .... congrats to your daughter's win. I thought your entry was fantastic. there is always next year ...

Hi Cathy :)
I have had the Cedar Hill Country Pumpkin Farm in my stash for a year or two-it was from my Friendly Stitcher. Enjoy it :) I will look forward to your progress :)
Thanks for sharing :)