It's been a good weekend for stitching - I've been camped out in front of the TV watching the Olympics and working on stitching projects.

First let me share with you a picture of the Fair & Square blocks that I received from Peg yesterday. Aren't they sweet? Thanks Peg! 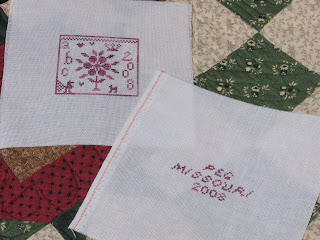 Last weekend I pulled this UFO out of my basket. I think I started it on New Year's day (2008) or shortly thereafter. I got busy with other projects and it's been sitting. But since it is a birth sampler and the baby's first birthday is coming up in a few months, I decided that I best get it done! This is for a good friend that I work with. The design is from La D Da and it is called Gabrielle Rose. I used DMC threads on 36ct Light Examplar from Lakeside Linens. I used one strand of floss over two threads. For anyone who might consider stitching this one, I would recommend using DMC 645 instead of DMC 646 for the words "I Love You" -- there wasn't enough contrast between 646 and the salmon colored pink (3773). I wanted something that was kind of vintage looking since the family lives in an older farmhouse. Turned out sweet don't you think? 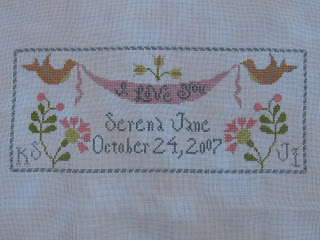 I have two exchanges in transit; one I fear might be lost. I was able to complete the finishing on another project for Make A Wish to be mailed later this week. Check back later in the week; hopefully I will have more pictures for you!
Posted by Cathy B at 7:21 PM

Your birth sampler turned out adorable...how are you going to finish it? Can't wait to see!

Oh, no! I hope your exchange piece turns up! My fingers are crossed for you!

The birth sampler is gorgeous Cathy, such pretty colours!

The birth Sampler is so sweet and your stitching is very pretty!

The birth sampler is gorgeous, Cathy, and will look so perfect in the kind of house you described!

Such a pretty birth sampler, and I love the LHN RR progress.

This is a lovely birth sampler Cathy. Congrats on your finish and good luck with your exchange. It is nerve-wracking worrying about it.

Nice work on the birth sampler. Your squares from Peg are lovely as are the squares you sent her. I hope your exchange shows up. One package that I sent to Holland took 8 weeks to show up!!

The LDD birth sampler came out beautiful, Cathy! I have it in my stash and wil make a note to use DMC 645 instead of 646. Pretty squares from Peg, too. :-)

Oh I love that birth sampler - what a sweet piece!