Sincere thanks to everyone who sent birthday wishes yesterday. I don't know why this particular birthday bothered me so much, but now I'm past it. It's a new month and pretty soon we'll be celebrating a new year! I have some stitchy pictures that I am excited to share with you!

First of all, a birthday gift that touched my heart. My friend Judy stitched this for me and did some special personalization. Judy and I first met at a Nordic Needle retreat in 2005. We both attended their retreat again in 2007. Shortly after that 2007 retreat Judy reached out to me via email and we started talking "stitching" and we've been good friends ever since. Of course, it helps that our tastes in stitching are similar - we both like to do Hardanger and we both love Blackbird Designs and many other designers. We've enjoyed several other retreats since then, like the Stitchville retreats and more recently, Dyeing to Stitch. We try to see each other once a month at Stitchville's monthly Sip N Stitch gatherings. I could go on and on..anyway, thanks Judy for your friendship! Judy stitched this Shepherd's Bush design for me -"Friends" and included our initials, plus "NN" for Nordic Needle and "2005" the year of our first retreat. It's finished in a cute little wedge and sits on a shelf in my stitching/computer room. Love it! Thanks again Judy! 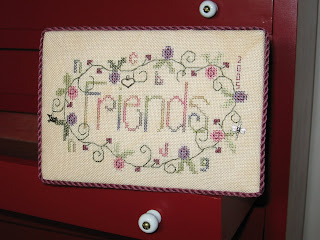 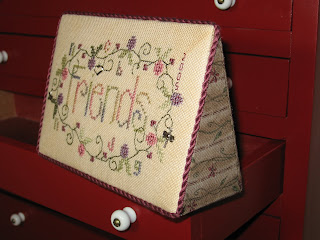 JoAnn's called on Monday to say that the rest of my framing was done. Hooray! I picked up these two pieces from them. 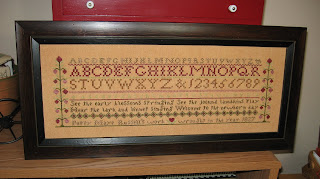 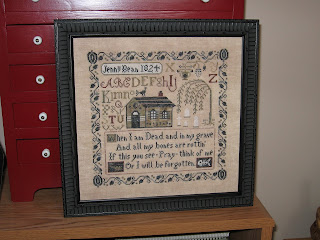 Jenny Bean's Halloween Sampler
Shakespeare's Peddler
36ct LL Pearled Barley
GAST Limited Edition Threadpack
I have to be honest with you; when I first started stitching Jenny Bean, I wasn't liking her very much. I don't stitch very many Halloween designs and I'm not a big fan of stitching graveyards or tombstones, but I loved the linen and I liked the thread colors and the more I stitched the more I liked this piece. Now that she's framed, I love her! I guess it just took a little longer for the two of us to bond!

Wish I had more to share, but there hasn't been a lot of time for stitching lately! Thanks for stopping by. Happy Stitching!
Posted by Cathy B at 7:12 AM

What a lovely gift from Judy, and your framed pieces are wonderful. Funny, I loved Jenny Bean right from the start :-)

Your framing is beautiful too. I really like the frame for JB:)

I love your framing! Great frame choices for some wonderful pieces! Love the gift too -- how special!

What a great story of friendship! I love what she made for you. It's just perfect. All your stitching looks wonderful!

Both framed peices look great. Wow at that lovely gift from Judy. I have never seen something made up as a wedge before. Brilliant idea. x

What a thoughtful and beautiful gift from Judy. Your framed pieces look great, especially Jenny Bean. Happy stitching to you.

Your framing and fnishing are beautiful!

A very belated birthday to you dear Cathy, you are such a sweet, sweet lady that Judy gave you the most perfect gift, for the most perfect friend. :) Lots of love to you!
And what birthday girl wouldn't love the call from the framers to say 'Pick 'em up!' GORGEOUSLY framed, I love each and every one of them :) You know my address :))))

What a lovely gift to receive! I love your stitched pieces and the frames are so pretty too.

Your framed pieces are absolutely stunning! And that is a really lovely birthday gift from your friend Judy!

Lovely gift from Judy. I love how she personalized her gift!
Your framed stitches are just wonderful! I wasn't a big fan of JB at first either but she's growing on me too.

Cathy,
Happy Belated Birthday! Remember age is just a number, its how you feel that matters. Love what Judy made you. It's adoreable! I have that pattern and now I'll have to go stitch it. LOL! Tell your mom her tatting is beautiful.

What a beautiful gift, and I love the framing. Its amazing how sometimes online friends can become such great real life friends.

A beautiful gift and your framed pieces look fabulous.