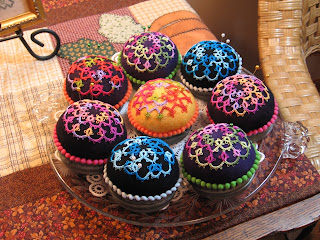 I'm not a big fan of cooking or baking; hey I'd rather be stitching! But recently, I've been cooking up some cupcakes.

As many of you know, my mom tats. A few months ago I was trying to think of a way to incorporate her tatting into some type of needlework accessory. I saw a pincushion that had been done in wool and adorned with crocheted medallions and that sparked an idea. The finished pincushions are very different from what I originally came up with, but that's okay - I like them!

I've done these two ways now - you may recall a picture of the designers at the Dyeing to Stitch retreat holding their tatted pincushions for a photo. Those were done in tart tins and were quite cute (if I may say so myself!) 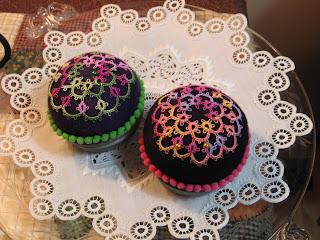 For this batch, I used some old zinc mason jar lids. The lids have lots of character to them (some have dates written on them; I noticed one of them had the year "1952" written on it - I wonder if the woman had canned pickles or peaches that year?) They are embellished with some trim I found at a local quilting shop.

My mom tatted motifs in various colors - she likes the thread called "Lizbeth" (a tatters version of WDW, CC, or GAST!) We found some wool colors that made the thread colors pop (thanks Roseanne) and voila! 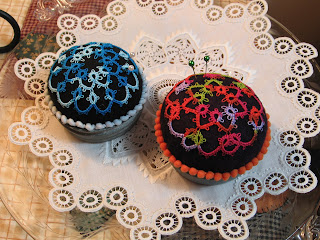 OMGosh, those are the cutest, sweetest most delightful cupcakes EVER!!!

They are WONDERFUL!!! Wow! I love them!

Those are adorable,,and your mothers tatting is beautful..thanks for sharing,,

These are adorable and really look like beautifully decorated cupcakes!

Cathy --
These are SO CUTE! Love the idea of you and your Mom working on these together!

Your cupcakes are beautiful.

Those are so awesome! You and your mom are a perfect team! I love her colors and I love the way you made them "pop" with your finishing. Great job!

Please pass me a cupcake!!! LOL These are adorable hun..

so very cute! and clever :)

I love your cupcake pincushions! They are darling!

Happy belated birthday. You'll enjoy this age, I promise! The cupcakes are - well, I can't come up with a word that hasn't been used here, but I LOVE them!

Wow! Those are absolutely scrumptious looking!

OMG!!!!! These cupcakes are adorable!!!!! Such beautiful tatting work~

What a colourful and creative idea, love them!

You know how I feel about these, GORGEOUS. I can barely wait to get mine. :)

They are sooooo cute! Great job!

These are more than cute. They are scrumptiously gorgeous!

Those little cupcakes are so sweet!!!! BTW, love your framing and I hope that you had a great birthday, too :-).

This is such a unique finish for your Mom's tatting. I think they're beautiful! I'd go for one of these cupcakes. Heck, I'd even have seconds!!

These are just too cute for words! I'd rather have one of these than the calorie-ridden ones any day! How wonderful that this is a joint project with your mom...makes them even more special. :)