And some treasures were found along the way...

We really had a great time on our road trip last weekend.  The original plan was to hit two or three needlework shops.  Can't believe we went to six (actually, seven if you count the one that was closed!)

What made the trip even more fun was some of the treasures we found along the way. I love going to needlework shops that have been in business for several years; you never know what you are going to find on their racks or in their clearance bins.  Like everything else though, you just have to spend some time looking at everything.

You might recall that our last stop on Monday was at House of Stitches in LaPorte, Indiana.  This is a good sized shop, overflowing with lots of needlework goodness, old and new.  (Mary, you had asked for pictures of the insides of the shops - I wish I had taken time to do this for you.)

Anyway, I have been trying to pull together a complete set of the Sampler & Antique Needlework Quarterly (SANQ) magazines ever since they stopped publishing.  I had a subscription the last few years they published the magazine, but I didn't have many of the older magazines.  Over the years I've picked up many of them via eBay and stash reallocation sales.  Anyway, I needed one more issue - Issue #37 from 2004.  I knew that House of Stitches and a good supply of needlework magazines and thought I might get lucky.  I should have bought a lottery ticket last Monday. 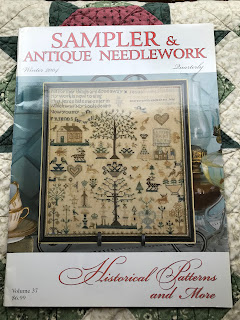 The previous Thursday we were at Inspired Needle in Lemont, IL.  This shop is celebrating it's 10th anniversary this year.  I found a treasure here too. 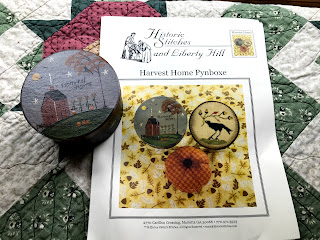 This was a joint project between Historic Stitches and Liberty Hill.  This is the second of two designs that they published, probably about 10 years ago.  I was happy to take it back home to Minnesota with me!

Also on Thursday, we visited Tomorrow's Heirlooms.  We so enjoyed visiting their new shop. Patterns and kits are so much easier to see because they have so much more space.  Many of their patterns are hanging on pegboards that you can flip through.  I spied this kit as we were flipping! 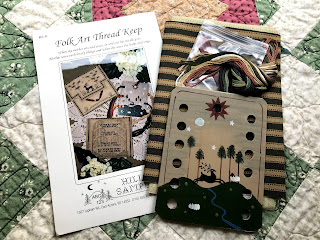 This was a collaboration between Hillside Samplings and Liberty Hill many, many years ago!  There was a series of kits and I think that maybe I have all of them now.  (I've stitched and finished one of them so far - the hornbook.)

Also at Tomorrow's Heirlooms, I found this vintage kit from Jane Timmers/Fancy Work. 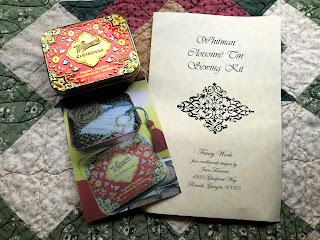 Finally, sometimes you even bump into treasures at shops that are fairly new.  Do you remember that our first stop was at Black Cat Stitchery in Winthrop Harbor, IL?  We just happened to be there when their limited release Mirabilia charts arrived.  We were talking about all the drama on Facebook over the re- release of the chart for Lady of the Flag.  Little did we know that we would have the opportunity to purchase it. 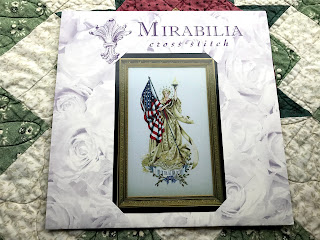 I've never stitched a Mirabilia, but I actually think I might stitch this one.  Another stitcher here in Minnesota stitched a beautiful version of this and had it framed by Jill Rensel.  There also is a post in the Stitch Maynia group of a color conversion that a stitcher did (converting the golds to shades of blue),  For some reason, I am really drawn to this Mirabilia.

Many more purchases were made, but these were the really special ones.

Since arriving home, I finished up a top secret project that I've been working on.  I'll share a picture with you next week.  I also pulled out some Hands on Design projects that I would like to stitch and finish.  I will be taking a class with Cathy later this year and would like to finish up some of the charts I've purchased from her over the years.  I'll share pictures soon.

To my Canadian friends, Happy Canada Day!  To my friends in the U.S., Happy 4th of July!  Happy stitching all!
Posted by Cathy B at 5:02 PM

You came home with some truly special finds, Cathy. I look forward to seeing which Hands On Design pieces you are going to work on.

Wow, you have me quite envious. Cross stitch is not big out here at all. The only shop I can actually go to is more than 3 hours away. And that is the only one in Portland. I would just die without the online stores. You found some real treasures!

I've enjoyed following your stash trip.
Thanks for sharing the pics.
You found some great treasures!
Don't you love HOS?
I think they have everything you can imagine there!
A fantastic shop!
Marilyn

excellent choices. I forgot about the candy tins! What fun to find the project.

I have some older issues of magazines, if there is something you are looking for, please let me know & I can bring (7/17). Fine lines, SAN-Q, unsure what all else.

How serendipitous you found the Sampler and Antique Needlework magazine to complete your collection. The pattern on the front is gorgeous. I love the Harvest Home Blackbird and the Mirabella Liberty is striking. Great haul from a great trip!! Next trip you will have to take interior photos! :)

Annie with the ducks said...

For those still looking for SANQ magazines you can get a DVD with all the issues on it.(1991-2015) You can then print any pattern. Since somehow I missed owning any original copies (where was I and what was I thinking?) I got my dvd at 123stitch. Worth it if you are missing a lot of issues.

I've really enjoyed the shop hop adventures of you and your partner in crime! Inspired Needle is my Not SO LNS - Cathy is great ! she is a plural member of our EGA chapter in NE FL and she does a great job with mail order. She also kits up stuff for our chapter. I hope to one day get there for a class or just to visit but Chicago is a LONG way from the deep south. cheers and happy 4th! Melody

Great finds!! I never had any interest in Mirabilia's until I stitched one. Now I want to stitch all of them :)

Me and My Stitches said...

I just visited The Inspired Needle and House of Stitches too! I could spend days and days in both of them - so much to see! You really found some treasures!